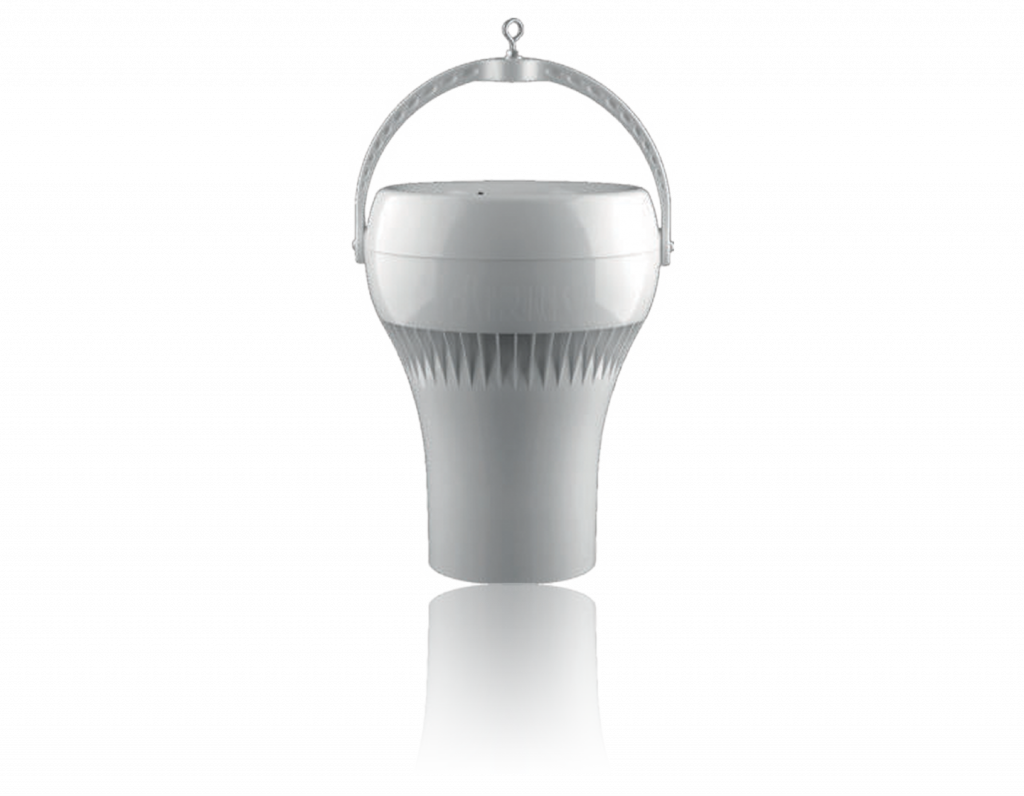 The Clenzair Fan 25 is an Industrial Air Purifier

and destratification fan with integrated NPBI – Needlepoint Bipolar ionisation. The Clenzair Fan industrial air purifier can be free hanging or installed into a suspended ceiling.

This design has been tested against the actual SARS COV2 pathogen that causes Covid-19. The Clenzair industrial air purifier fan provides a 99.9% inactivation rate against the virus.  The Clenzair fan – 25 is one of the larger Clenzair fans available. This industrial air purifier is the perfect defence solution for spaces up to 201m2.  It is designed to operate 24 hours-a-day, 7 days-a-week to protect against airborne mould, bacteria, viruses, odours and VOCs. Due to its innovative design, the Clenzair Fan can improve heating & cooling costs by up to 30%. Check out other Clenzair products here.

The Clenzair Fan 25 is an industrial air purifier ,providing airflow circulation, with an integrated Needlepoint Bipolar Ionization (NBPI) System. The technology works by emitting both positive (H+) and negative (O2-) ions. Ions surround harmful pathogens and react as Hydroxyl (OH) radicals. This process removes hydrogen from the cell walls of microbes, inactivating harmful pathogens at a cellular level. In turn eliminating over 99.9% of bacteria, mould and viruses present in crowded but also domestic environments.

Much like sunlight does in the atmosphere, The NPBI  technology produces a natural bio-climate rich in positive and negative oxygen ions. The negative ions contain an extra electron while the positive ions are missing an electron resulting in an unstable condition. In an effort to restabilize, these bipolar ions seek out atoms and molecules in the air to trade electrons with, effectively neutralizing particulate matter, bacteria and virus cells, odorous gases and aerosols, and VOCs. It can be used in a variety of sectors and settings, creating ideal conditions for the wellbeing of people.

The Clenzair industrial air purifier has also been tested against the SARS COV2 pathogen, providing a 99.9% inactivation rate (4 log kill)

The Clenzair Fan Air Purifer comes in various sizes to accommodate your space and requirements.  By incorporating the industrial air purifier into your settings, you are ensuring your employees and the people around you are inhaling clean, purified air, thus promoting a sense of well being in the workplace. The fan benefits from using Needlepoint bipolar ionisation which rids the air in your environment of harmful bacteria, mould and pollutants. The Destratification fans are easy to install and deliver low cost protection solutions. The fan uses the power of ions to deliver continuous sterilisation, neutralising up to 99.9% of all known pathogens, VOCS and odour found in the air and surfaces.

During the ionisation process, ions dispersed by the unit disrupt pathogens found in the air by disrupting their surface proteins meaning they become inactive and no longer harmful

The NPBI doesn’t just target harmful toxins and bacteria found in the air, it is also rids your environment of odours. The ions break down odours from chemicals, pets , cooking and other odours, transforming them into harmless compounds

The technology reduces the amount of the air required from outside to keep indoor spaces clean and fresh, therefore lowering energy consumption, saving users on average 30% on their annual energy bills

The Destratification fan systems are equipped with EBM Papst motors, which help to deliver incomparable levels of efficiency and longevity. In selecting this product you can guarantee lower carbon emissions for your setting as well as reducing your heating and cooling costs.  There is no maintenance required to ensure its efficiency. The fan is available in 3 sizes, meaning it can be installed in most places depending on your requirements.

GET IN TOUCH TODAY FOR MORE DETAILS