How does an Ioniser Air Purifier work?

Ioniser air purifier – what are they and why do you keep hearing so much about them? Ionisation technology has been around for many years but people have only recently started to take notice of the many benefits of air ionisers. When you learn about the vast benefits they have for people and their health, enabling them to protect themselves and their surroundings, it is not surprising! From killing 99.9% of bacteria and viruses – some even proven to kill Covid-19, to eliminating mould and odours. They are also extremely useful for sufferers of asthma and allergies such as hay fever as the technology eliminates the triggering substances such as pet dander, pollen, mould and other small particles. 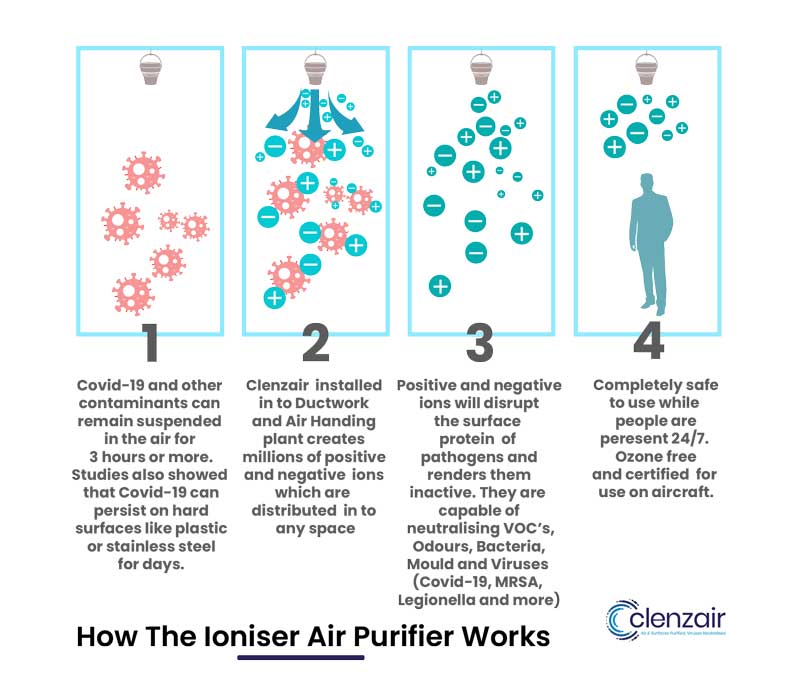 Ionisation technology such as Needlepoint Bipolar Ionisation or Cold Plasma all have the same core principles. High concentrations of positive and negative ions are produced and dispersed to the desired surroundings via the given air purification ionisation device. Ions naturally occur everywhere and are found in high concentrations near waterfalls, crashing waves and in sunlight – They are responsible for that fresh air feeling you get when you’re by the sea. The negative ions contain an extra electron while the positive ions are missing an electron resulting in an unstable condition. In an effort to restabilize, these ions seek out atoms and molecules in the air to trade electrons with. The negative ion air purifier(ioniser air purifier) could effectively neutralise particulate matter, bacteria and virus cells, odorous gases and aerosols, and VOCs. This process removes hydrogen from the cell walls of these microbes, inactivating them at a cellular level delivering low cost, effective protection.

How does an Air Filter Purifier Work?

Different from Ioniser air purifier, air filter such as HEPA filter works by trapping harmful particles in a series of folded material that make up the filter. HEPA filter must be able to trap at least 99.97% of particles larger than 0.3 microns to meet standards. To put this into perspective, the human eye can only see particles larger than 10 microns. The HEPA filter is a very fine fiber-like material that has been folded back and forth to create the shape of an accordion. This accordion shape creates a maze of randomly arranged fibers and presents a very large surface for air to be pushed through by the air purifier fan. 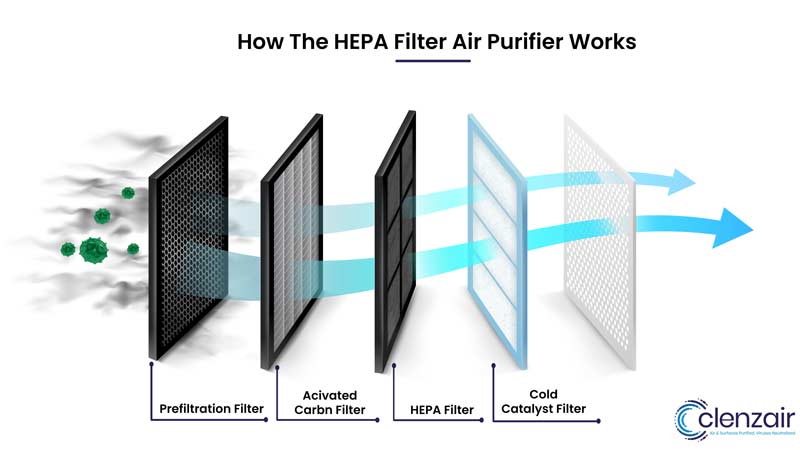 There are 3 stages of a HEPA filter process – Impact, Interception and Diffusion. Dust particles cash into the filter fibers and get trapped on impact. Particles not trapped on impact move throughout the filter, the airstream causes particles to get too close to a nearby fiber, stopping them in their tracks. This is referred to as interception. Diffusion is where particles crash into one another resulting in them being redirected to nearby fibers in the filter. The air must pass through the filter in order for it to be cleaned, air that has not been passed through the filter that is present in the room will not be cleaned. HEPA filter air purifiers are extremely effective at trapping airborne particles such as pollen, pet dander, dust mites, and smoke; however, they do not remove odours, chemicals or gases.

The difference between the Air Filter and Ioniser Air Purifier

The major difference with air filters and air ionisers are the method in which they remove unwanted particles and pathogens from the given space. Ionisers are known as an active method of air purification whereas filters are what as known as passive. Ionisation is active as ions are pushed throughout the whole room actively searching for viruses, bacteria and particles such as pollen and pet dander. Filters are passive due to them being static, they can only neutralise viruses and bacteria and eliminate particles that are pushed through the filter, this means it can be difficult to ensure all the air in the room has passed through the filter.

Cost is a massive factor when people are looking at air purification devices. Getting the most for your money whilst still having the most effective method. Filters are undoubtably more expensive than ioniser air purifiers. The filters are expensive due to the strict requirements they must meet and it is not only this, you have to also consider the cost of new filters. HEPA filter air purifiers will fail to work effectively if the filters are not changed regularly. A great advantage for ioniser air purifier is that they are self-cleaning and require no maintenance, which is hassle free and also great from a cost saving perspective.

There are lots of very sleek looking air purification devices on the market which would not be unsightly in homes or offices, and while it is not essential it is definitely a bonus! Filter air purification devices come in a wide range of sizes and shapes and there are options to have these devices mounted or free standing pretty much anywhere. The downside of filters such as HEPA filter is when they are placed into an air handling unit they can dramatically reduce the airflow. For commercial settings it is recommended to 8 air changes per hour. If you put in an HEPA Merv 17 filter it will almost half your airflow due to the tightly packed filter making it difficult for air to pass through.

The Ioniser air purifier is also available in a wide range of sizes, shapes and colours. A technology called Needlepoint Bipolar Ionisation is arguably the best ioniser air purifier technology in the market. It is not only very effective it is also very versatile from a design perspective. It is available in a small stand alone, mains powered units. It also comes as part of a destratification fan which can be mounted into the ceiling or free hanging. These are great for commercial settings as they cover a very large area and the destratification fan gives people the reassurance that the ions are being dispersed through the given space. It is also a bonus as people are able to look up and clearly see the air purification device, allowing business owners to use this as a method to show staff and customers they are taking their wellbeing seriously and are being proactive in the fight against covid. Finally ionisation devices can be mounted into exciting air handling units and air conditioning, the ions are then dispersed to the surroundings via the existing duct work, this is a great option for when people want the protection offered but do not want it to be visible in their premises.

Both the ioniser air purifier and filter air purifier have come under the spotlight in the past for claims over how safe they are to use. Old forms of ionisation produced small amounts of ozone. The new technology Needlepoint Bipolar Ionisation uses no harmful chemicals, creates no harmful bi-products and creates zero ozone. This has all been rigorously tested and certified. The Hepa filter is also looked into as they can shed tiny fibers which can be harmful to people’s health. However filters that have passed strict requirements and have been fitted correctly pose no harm to people. 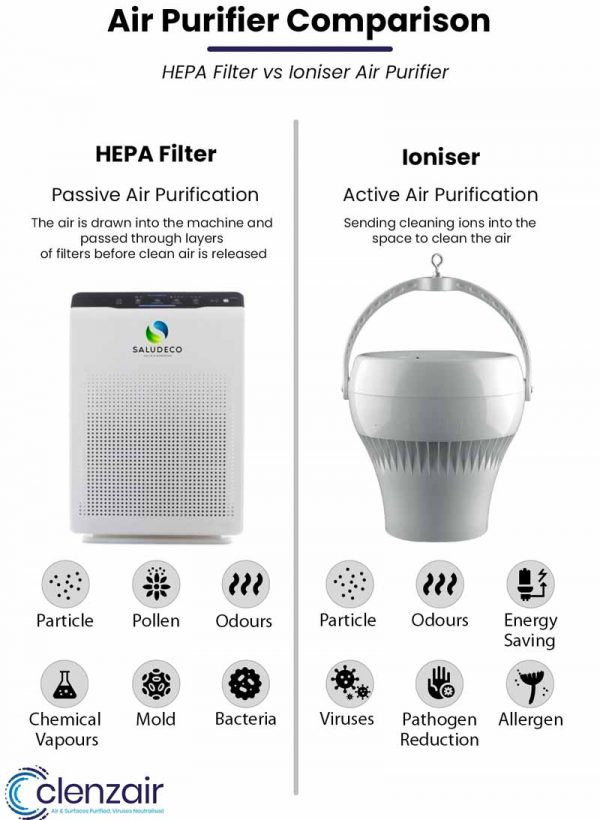 Both air filters and ioniser air purifiers have their benefits when it comes to eliminating unwanted pathogens and particles from your surroundings. Both have been rigorously tested and have great features.

Filters such as HEPA filters are widely used and can trap particles sized 0.3 microns and above securely with in the filter. They can eliminate airborne particles such as pollen, pet dander, dust mites, and smoke from your surroundings however, they do not remove odours, chemicals or gases.  They are available in a wide range of sizes and designs, but are expensive to buy and maintain over time due to the costly filter changes.

Ioniser air purifier releases naturally occurring ions into the given space and use a natural method to eliminate unwanted viruses, bacteria, odours and aerosols, with no harmful bi-products. The technology is widely in use across the USA and the UK ioniser market will follow the trends seen in the US. They also provide a more economical and hassle free option with no maintenance required and with the many different devices available there is sure to be an ionisation air purification device to suit anyone’s needs!

Ionisation technology such as Needlepoint Bipolar Ionisation really is the future of indoor air quality and the scientific evidence behind it really is unmatched. With places such as the White House, Google and Microsoft headquarters already investing in the technology we would definitely recommend ioniser air purifiers.

We are always on hand to answer any air purification questions you may have to get in touch!