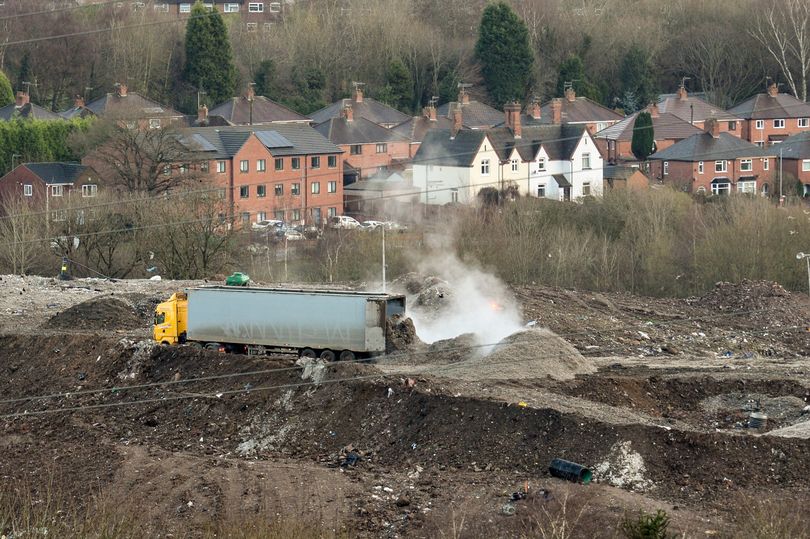 A MOTHER-OF-TWO has taken drastic measures to keep her children safe from poisonous smells created at nearby landfill site after having the same air purification system installed in her home as the White House.

Suzi Stringer, 40, lives in Newcastle-under-Lyme in Staffordshire where the community of Silverdale has been blighted by the horrific stench from the Walleys Quarry which she says causes ‘frequent headaches’ and even ‘nose bleeds’.

Residents have come together for a High Court legal challenge against the Environment Agency over the noxious smells with a decision expected today (Thursday, September 16). The case is being brought by the family of a boy, Mathew Richards five, after a medical expert deemed that the pollution is shortening the life of the young boy who has a health condition.

The smell has got so bad that Mrs Stringer has had Clenzair air purification system installed in her home which she says has given her her ‘first full night’s sleep in three years’. The air sanitisation device is on 24 hours a day and constantly cleans the air and surfaces in the Stringer family home and neutralises the odour which stinks of ‘rotten flesh’.

The same system behind Clenzair is operational in The White House in Washington D.C. and uses technology called Needlepoint Bipolar Ionisation (NPBI). This ‘ground-breaking’ system has also been tested against a live strain of SARS-CoV-2 in the US and has been proven to kill Covid-19, as well as eliminating other airborne viruses, bacteria, and mould.

Mrs Stringer said: “I was highly-sceptical about the air purification system but was also at my wits end. We all had frequent headaches, coughs, nose bleeds and nausea. My baby had never slept through the night, and she is now 16 months old.

“The night after the system was installed, I had my first full night’s sleep in over three years. I don’t have a constant sore throat, my children sleep better and the smell is no longer trapped in my home.

“My mental and physical health has suffered greatly due to the quarry. While the Clenzair system can’t reduce or remove the smell outside our home and I still cannot open our windows on many occasions, it has given us respite from the stench. It has improved our quality of life and means that I can enjoy our home more.

“If the smell gets into our home through open windows or doors it quickly removes the issue. Previously our home continuously smelt of landfill, now we have a far more pleasant environment and I’m less likely to move from the area.”

Mrs Stringer moved to Silverdale with her husband, Dan, in 2016 and she got involved with the ‘Stop the Stink’ campaign two years later. She said the couple tried to sell their house at the start of last year but then Dan lost his job due to the impact of the Covid-19 pandemic.

Mrs Stringer has had the air purification system installed in her loft which cleans the air through a ceiling diffuser grill with a speed controller fitted in the airing cupboard.

NPBI cleans the air of harmful particles and deadly pathogens by introducing completely harmless, naturally occurring cleaning ions into the airstream and, unlike chemical fogging systems, typically used in schools, people can remain present in the room. The technology has been certified as not creating ozone or VOCs.

She said: “The smell from the site steadily got worse and has continued to invade our home. On the day my daughter was born we had one of the worst weekends of stench. I bought my daughter home to a house that smelt of rotten eggs and faeces.

“I was driven to despair with the smell as my stepdaughter and my baby used to cough every night. On numerous occasions I’ve packed up my family into the car in the early hours to escape the smell. We even tried to sell our house, but with my husband losing his job during the pandemic we were left in an impossible situation.

“My children have benefitted the most from the Clenzair system and as a parent, that is the most precious thing I could ask for. The NPBI technology removes odours not only from the air but also from carpets, curtains and clothes and our children’s toys, which has been a big problem over the last few years. The system uses no chemicals, produces no ozone, is safe for children and pets, and is used in the White House!”

Make A Wish host Disney experience with the help of Clenzair!